The motivation for the VOM series of work stemmed from my initial fascination of surfaces and decoration. I view the surface and form of things as the container of histories, experiences and stories that led up to its appearance and “attitude” - which is the outward manifestation of the interior. Having moved abroad to further my studies, of course, things become new again: I had new eyes. Reflection of myself and America, the country I grew up in, and the phenomena of how things manifested within this country, appeared itself to me.

In particular, I started to look at an era - a heavy era - between the two world wars where the Western world was visibly entering into modernity: the surfaces of things were being cleansed and streamlined. Buildings were designed to look like machines. Steel and glass. The International Style. No décor on the surfaces of things, no more vernacular white-washing, baroque ornateness, sensuality in lines and curves, et cetera. The advancement of science and progress, of chemicals and hygiene rubbed off onto civilian of life. For instance, window sills in hospitals: it is easier to clean a smooth, white surface, which equally signified hygiene in the mind of the observer, than a wooden window sill complete with its architraves and jambs. As also with the use of white t-shirts under the modern suit. The erection of this white “screen” signified hygiene and the physical body, with its contours and warmth, became an idea, a space within the mind. This also takes on the issue of class, or those who could afford to buy and maintain these types of clothes, and those who's sweat and labor cleaned and manufactured these commodities. 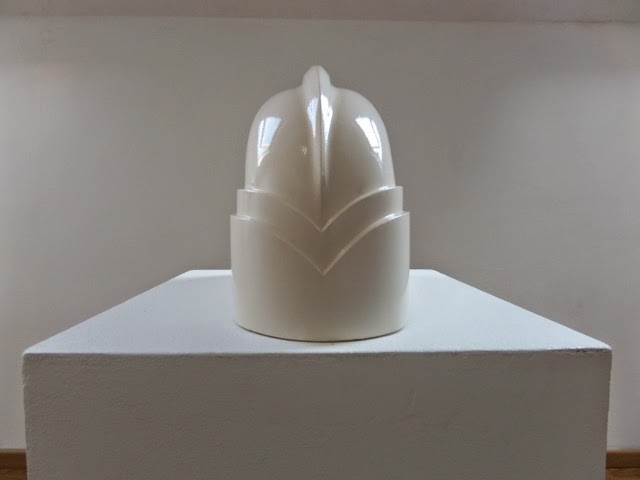 "V.O.M. #3", Ceramic; 2013
(© Tramaine de Senna/Platform 102, Brussels)
There are two distinct World's Fairs within the Unites States, which hold significance for me: the World's Columbian Exposition of 1893 in Chicago with its white plaster city and the 1939 New York World's Fair with its hope for the future. Where the white plaster city of Chicago emulated Western Europe, the 1939 New York Fair held its own distinct look and identity. Observing how cities are planned, whether organically, from a grid, or as a radial, initially America has leaned towards borrowing aesthetics from across the Atlantic for weight and meaning in defining itself as a republic with history. Just look at any state or federal building. Its architecture alludes to classical Greek and Roman architecture, which then borrows itself from ancient Egypt like that of the Temple of Karnak, and so forth.
With the 1939 New York Fair an aesthetic of the future, not the past, defined a new era for America and the world. This again, has a lot to do with the military industry. The aerodynamics of planes, bombs and bullets, rubbed off onto civilian and domestic life. Industrial designers created sheaths for trains, giving theses machines the appearance of cyclops roaring through landscapes. Cars grew sensuous curves too. Yet, things that had nothing to do with aerodynamics and speed also took on this appearance and therefore the idea of speed: desk lamps, fans, barometers, even women's brassieres. The surfaces of things that were streamlined and cleansed of superfluous décor in fact became an aesthetic, a decoration.
For these interests, I was compelled to create this V.O.M. series. 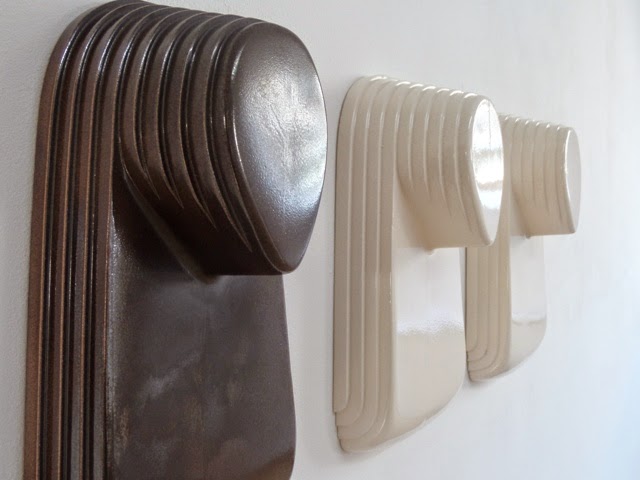 Technically speaking, the V.O.M. Ceramic series are slip-cast earthenware. This technique of slip-casting is usually employed in making smaller objects which hold not so much volume, such as cups and plates. This technique is also used for porcelain production. The three distinct shapes are of my own design, which came from studying this era as described above, and then boiling down a basic essence of shape and form. First, the object (positive) had to be designed and made in clay which was destroyed in order to reach the second step: a plaster mold (negative). From the plaster mold, a hollow plaster positive was constructed within it, which was the third step. The plaster mold, or negative, was then destroyed to take out the plaster positive form. This plaster positive was then wet-sanded to obtain a smooth surface, which almost appeared non-porous when water was sprayed onto its surface. From there, the forth step of creating a three- or four- part massive plaster mold (negative) around the hollow plaster form was taken. This massive plaster mold was also wet-sanded on its interior surfaces because it would serve as the “mother” to the slip-cast earthenware objects – the positives. The fifth step involved pouring liquid clay into the mother molds. As the liquid clay rest within the mother molds, the plaster would absorb the water from the liquid clay, leaving a skin along the mother's interior, wet-sanded surfaces. After 1.25 hours, the liquid clay was poured out, and a hollow form (positive) was left. These positives had to then dry for at least 1 – 2 weeks, where then fired, sanded, and then glazed. Glazing required the surface to be free of dust, hand-prints and any oils from the hand. For glaze, I either calculated and mixed my own non-lead chemicals, or purchased it. I then sprayed on the glaze with a pistol, then fired the objects again for a second time. 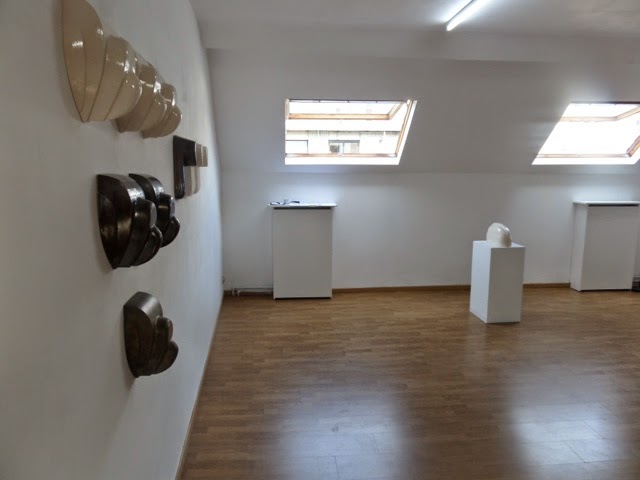